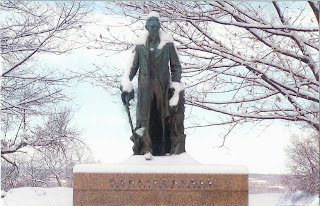 It's back to school time, and I'm hoping to be receiving a lot more postcards from colleges and universities. Here's an addition to that series (first C&U post, second C&U post) from Cornell and Ohio Wesleyan.

The postcard on the right, from Cornell, is the second from that university, but this time it is during the winter. Of interest is that while the statue is of Ezra Cornell, the sender of this postcard tells me that the university was not founded by him. Perhaps there are multiple Ezra Cornell's and this statue is not the founder but a quick trip to Wikipedia indicates that indeed, an Ezra Cornell was one of the founders of that institution. Hmm.

The Ohio Wesleyan postcard on the left is of particular interest because the sculpture on the right side of the picture was created by the sender's grandfather, Ebb Haycock, a sculptor of some renown. Perhaps more so for the grandparents and parents, but I think it must be exciting? empowering? to be a third generation legacy at the college you attend.
Posted by Mary at 9:42 AM