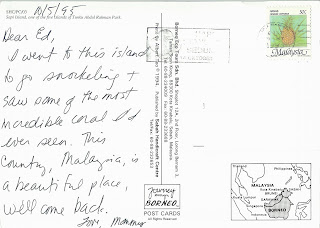 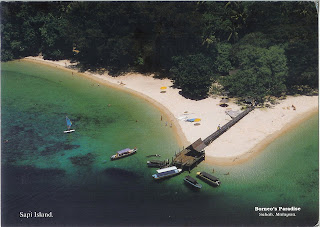 The most exotic business trip I ever took was to a meeting for the Saatchi & Saatchi Asia/Pacific general managers in Kota Kinabalu on the island of Borneo. Turns out Borneo, the largest island in Asia, is also the most centrally located and very reasonable from an economic standpoint place to gather people from all over Asia, from India to South Korea and Japan.

So there we were. We had an afternoon off and you could take a small boat from the resort in which we were staying to the island featured in this postcard.

The island was incredible. You could walk around it in 30 minutes. At one point, on one of the beaches, a clam shell the size of a cooler, was washed up on shore. It was surreal. "Is this Disneyland?" I thought. Is there a man behind a curtain saying, "Cue the clam shell"? That's how incredible this place was. The coral formations in 15 feet of water seen snorkeling were as spectacular as anything I've ever seen underwater, even when scuba diving at much greater depths.

Anybody else ever have a business trip to a more exotic location?
Posted by Mary at 7:47 PM