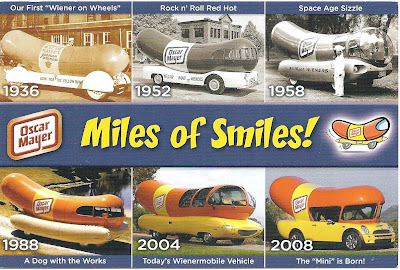 Three months ago, I started working at the San Francisco Food Bank, a non-profit organization that distributes over 40 million pounds of food per year to people at risk of hunger in our commumnity.  I never realized that not only would I be helping those in need, I'd also have opportunities I never imagined.
One of those opportunities appeared in the form of the Oscar Mayer Weinermobile.  We received a call from the "hotdoggers" who drive the Weinermobile around the country asking us what they could do for us - they had a three hour window of opportunity and would be happy to help us raise money or food.  We had them park the Weinermobile at the Castro District Safeway, and put out tweet and Facebook messages that the first 200 people to show up with non-perishable food or money, would receive a Weiner Whistle.  Who wouldn't show up?

Since 1936, the Weinermobile has been the rolling manifestation of a brand, an icon on wheels, an image cemented in our brains (well, in my brain at least) usually in concert with the ubiquitous "Oh, I wish I were an Oscar Mayer Weiner" jingle of the Oscar Mayer commercials from 1963.   And while the event wasn't a huge success food or money-wise (it was a rainy morning and set up very last minute), I have to say it was totally cool hanging out with the Weinermobile and seeing the responses of people who either came deliberately to see it, or stumbled across it.

The entire persona of the Weinermobile is fun, a bit silly and very pun-filled.  Even the Wiki about the Weinermobile feels like it is written with a small amount of tongue in cheek, including a list of mishaps the Weinermobile  has experienced.  It has had run ins with the police (an alleged stolen license plate "YUMMY"), criticism from the Outdoor Circle (environmental group in Hawaii who enforce strict anti-billboard standards and considered the Weinermobile a rolling billboard), and more than a few minor accidents.

The drivers, called "hotdoggers", are recruited their senior year of college for a one year term.  Our hotdoggers were cheerful and friendly, and I think looking forward to a much needed two week holiday break.  I imagine it can get a bit tiring answering the same questions over and over and over and over again. 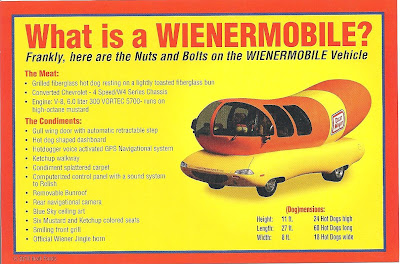 It's new year's eve day 2010.  One of my new year's resolutions is to get back to posting postcards more regularly.  I hope you'll keep reading!  Here's to a happy, healthy and prosperous 2011 for us all.
Posted by Mary at 9:37 AM 8 comments: