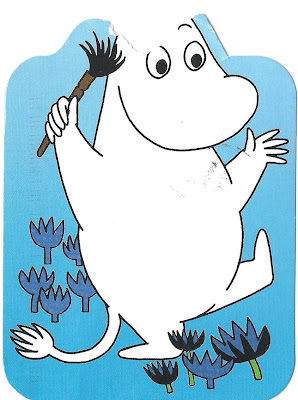 Big day!  My first Moomin postcard from Finland, through Postcrossing.  I've mentioned before that the Finns, given the size and population of their country, are by far the most well represented country on Postcrossing, and that many people, in their Postcrossing profiles and postcard requests, wish for Moomin postcards from them.

I was particularly excited to receive this postcard because I've been familiar with Moomin for a long time, way before my involvement with Postcrossing.  My cousin, David, actually has what are probably first editions of Moomin books and and the figures/dolls that go with them from his childhood.  I remember his reading (and perhaps his dad or mom's voice as well), in a particular tone of voice, about "Moomin, Mymble and Little My."

I hope he likes this postcard, as he reads my blog.  (Hey, David & Nancy!)

I was also excited because my husband is 50% Finnish, which makes my kids of Finnish heritage.  It seems like Moomin is something they should know about.
Posted by Mary at 8:03 PM 9 comments: 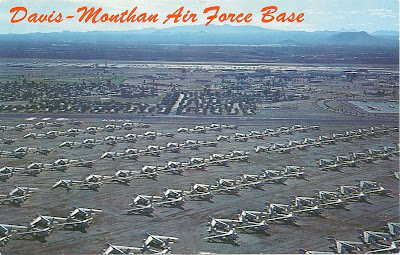 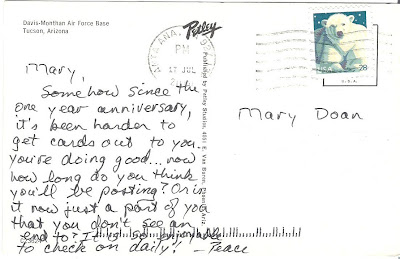 If hundreds of ships no longer in use but still floating in the Bay is called a "mothball fleet", does that make a similar number of decommissioned planes a "mothball squadron"?  Just curious.

The Davis-Monthan Air Force base just south of Tucson was declared a National Historic Landmark in 1994.  From the Wiki:


The base was selected as a storage site for hundreds of decommissioned aircraft....... Tucson's dry climate and alkali soil made it an ideal location for aircraft storage and preservation, a mission that has continued to this day........
With a variety of items on loan from the National Museum of the United States Air Force, including an inert Titan II missile ....... the sole remaining example of a Titan II missile site in existence.
I drove by this base once, on the way to a fancy spa in Tucson.  It's quite a surprise to be tootling along, and all of a sudden pass row after row after row of old planes.  They seem to go on forever.﻿
On another note, in response to the question posed by the Mystery Sender in the postcard above, the answer is "I don't know."  After a couple of failed attempts to get back into a more regular groove of (almost) daily posts, I am determined to do a better job of keeping up the momentum this time.  Wish me luck!
Posted by Mary at 6:00 AM 6 comments: 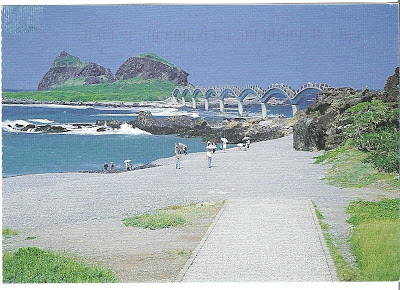 Cheng Kung Three Fairies Terrace is in Taiwan.  From the back of the card:  It (sp.) located at the northern part of Cheng Kung Town in Taitung County, is given such a name as there are three hills on the island.  During monthly lowest tide, people may cross over on foot and camp on the plains of the island.

This card came from Birdie, through Postcrossing, a 20 year old student in Taiwan who likes drawing and painting and has a cat.
Posted by Mary at 6:00 AM No comments: 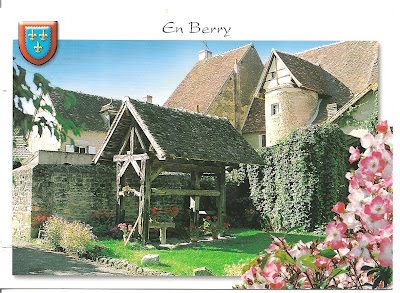 This card is from a fellow "Postcard Friendship Friday" friend Sheila, of A Postcard A Day.  She lives in England, but has a cottage in Berry.
She's my postcard blogging hero, as she never misses a day, seems to have an unending supply of interesting and unusual postcards, features some cool widgets (the map of the world showing where the postcards from her most recent 100 posts are from is one particularly good one), and, as of today, has 869 followers.  Wow!
At Thanksgiving, Sheila made a comment on my post about how she "yearned to taste pumpkin pie.  As we had exchanged a few postcards and I had her address, just for fun, I mailed her a box with all the ingredients needed to make a pumpkin pie, except the crust:  a can of pumpkin (recipe on the back), evaporated milk, and a little bag of pre-measured spices.  I assumed she would either know how to make or be able to buy a pie crust.  Haven't heard yet if she's received the box and/or made the pie, but I do know she's been traveling.  Can't wait to hear what she thinks!
P.S.  Berry is a region in the dead center of France. The writer Balzac, author of "The Human Comedy" was from here. Berry was originally a province, until French provinces were reorganized into ﻿"departements" in 1790.
Posted by Mary at 6:00 AM 1 comment: