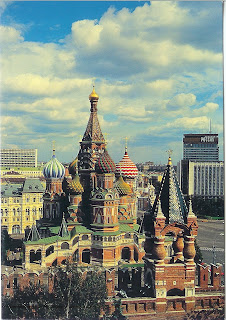 A few years back, I spent two weeks in Russia. My friend, Nelli, works for Intel and was based in Moscow for a couple of years, so I went to see her. We stayed in Moscow and then together took the train to St. Petersburg - she had business there.

Nelli's apartment was right off Trevskaya, which is one of the main streets in Moscow and runs right into the Kremlin and Red Square, no more than a 10 minute walk.

Until you see Red Square, it's impossible to imagine how huge it is. (Confession: I had no idea Red Square was outside the walls of the Kremlin. I thought the Kremlin was a building, not a walled fortress with multiple buildings, including a church, inside.) While I was there, Red Square was almost completely blocked off, as it was being prepared for a huge demonstration in celebration of the anniversary of the end of the Great War (Russian name for WWII). This vast emptiness devoid of pedestrians made the square seem even bigger.

Russian soldiers from multiple regions of the country were in town for this celebration, dressed in regional and/or historical soldier garb. The hats were probably the most exotic aspect of their uniforms, with most being made of some type of black and white fur or wool.

St. Basil's Cathedral is on one corner of Red Square. The above photo does not do justice to its brilliant colors, particularly the tiled domes. The domes and turrets looks like blown glass, especially on a sunny day. Most floors and rooms are completely accessible, and it's possible to wander throughout the church.

I grew up in the era of Russia (or U.S.S.R) as the evil empire, and communists as something the U.S. fought on multiple fronts throughout the world - athletically, scientifically, geographically, nuclearly, philosophically. The avid reading of spy novels and watching of James Bond movies merely amplified their enemy status. I added to my own existing mindset by reading The Charm School, by Nelson deMille, on the way over on the plane. It is a classic cold war spy novel, set entirely in Russia and much of that in Moscow itself.

The entire visit to Russia was mind boggling for me. As we drove around town, many of the landmarks and buildings and roads were familiar, from spy novels. But the bleak, everything grey and colorless, no products on the shelves images I had were blown away by a vibrant city filled with contemporary stores, well lit and graphically interesting advertising (!!), and energetic, excited young people everywhere. It was wild.
Posted by Mary at 3:49 PM