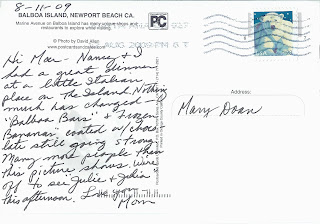 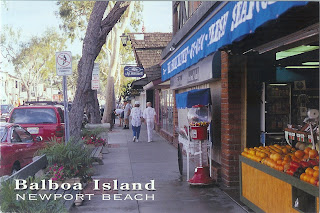 My mom is one of my most consistent postcard suppliers. She always has sent postcards from her travels, but she's upped the amount, now that I'm posting postcards on this blog.

These arrived yesterday. She's staying on Balboa Island with one of her oldest and dearest friends, who now lives in Texas. But when they were growing up in Southern California in the 30s and 40s, they spent a lot of time together on Orange County Beaches, including Balboa Island. As she writes on one of these postcards, she learned to swim there. 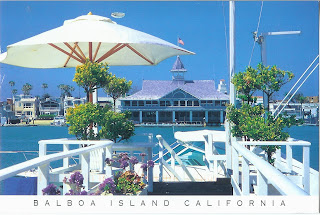 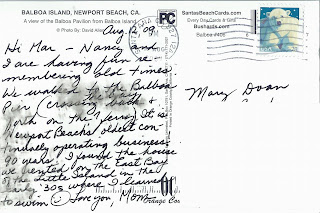 I spent a lot of time here while growing up as well. I remember one Easter Vacation, in a small rental apartment with The Ogdens, with whom we frequently took beach vacations. They later lived on the small island (there are two, always knows as "the big island" and "the small island"). It rained the entire time and our Easter egg hunt had to be inside. If we'd be there for the day in the summertime, it was a big deal to have dinner at The Jolly Roger (pirate theme before pirates were ubiquitous). I wonder if it's still there? On main street was one of the first "make your own bikini" stores, where there were a variety of tops, bottoms and materials, and you put them together in the way that worked for you.

When I was in high school, friends' families had beach houses here and/or rented houses here, and I was lucky to be invited to stay at many of them. Many of our classmates would be on the Island, particularly in August, and there were lots of parties, and lots of walking around at night, stopping in at one or another house to visit. Lots of "shenanigans", as my Dad would have said. Especially at Chris's house. Her family's house was right on the bay on the small island, and had their own dock. Even if the front house was rented out, there was a back apartment, so we could almost always stay. We had a lot of fun there. A lot.

One of my summer jobs was taking care of kids whose families had houses at the beach. Often, my responsibilities included taking care of them during the day, but having the nights off. At one of these jobs I had a sting ray bike to use. Once the kids were in bed, I would ride this bike around Balboa Island, racing through back alleys, long blond hair flying, tan glistening. This memory is visceral - I vividly remember feeling very free then.

I was too chicken to jump off the Balboa Bridge into the bay, but my friend Michelle (the one with two "l's") wasn't. You had to race to the bridge, scramble up on the ledge, and jump, fast, before the harbor patrol or cops came by. Depending on low or high tide, it was probably 25 - 40 feet up.

During the day, we'd take the ferry to 8th Street, on the Newport Peninsula. There must have been a reason we went to 8th street, but there would always be a group of kids from our high school at this spot. The beach is incredibly wide on the Newport Peninsula, and if it was a particularly hot day, you'd have to employ the towel throw to get to the edge of the beach without burning your feet - throw the towel, run, stand on it for a minute while your feet cooled off, repeat. Multiple times. If the waves were up, we'd head to the Wedge, just to watch. We had a friend who worked on the ferry, and he'd often let us cross for free. This same ferry is still in use, even though only three cars are allowed at a time. The view is spectacular. You approach the peninsula looking at the Balboa Pavilion (seen in the postcard, lower postcard on leftt), boats bobbing and dodging the entire way.

I don't remember the docks being quite as decked out as they are in the photo above - a fancy private dock at that time meant a pot of flowers on the posts, and that was it. Other than that, the place hasn't changed much over time.
Posted by Mary at 7:20 AM