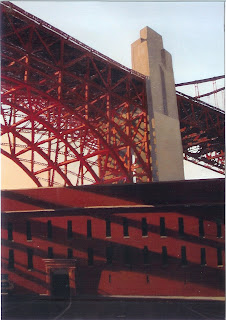 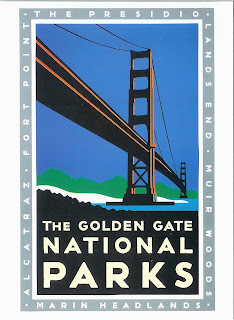 Another iconic landmark - the Golden Gate Bridge. I have driven across this bridge hundreds of times, and walked toward it on the famous Chrissey Field to the bridge and back path more hundreds as well. It never ever gets old. I love the perspective you get of this bridge when you come upon it from Marin Country. As you exit Rainbow Tunnel, one of the towers appears before you, with the sparkling white city behind it (assuming sun). Then a closer tower appears, boom, which can be a bit jarring and feels almost like an optical illusion.

My son, a native San Franciscan, got another tattoo this summer which is close to the version on the left, but reversed and with a bit of fog around it. It looks pretty good.

As I've been posting my postcards, I've been learning more about postcard collecting. Did you know there are websites for collectors whose subject area is so specific, it's amazing there are enough postcards to share? I came across one the other day whose concentration was interiors, 1950-1982. Something like that anyways. Other people collect only bridges, or only buildings, or only transportation vehicles. Makes me a bit of a dabbler, I suppose.
Posted by Mary at 8:24 AM