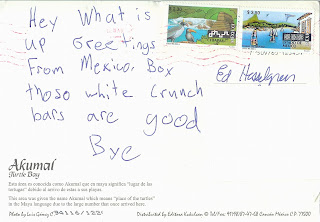 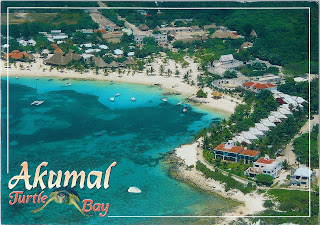 One of my favorite places on the planet - Akumal. Just the sound of the name relaxes me like aromatherapy does for others.

I've been visiting here since about 1985, and have probably been 10 or 15 times. The first time, we went for Thanksgiving. There were eight or nine of us, in two casitas. No phones anywhere in the little town, just a restaurant, the Cho-mak Supermercado, two dives shops and a small gift store. A local Mayan woman sold stacks of tortillas out of the front room of her home, but you had to bring something to carry them away in. Heaven.

Over the years, the entire coast from Cancun to Akumal (about 100 km) developed rapidly. Each time we returned, there were more resorts lining the coast, Playa del Carmen (half way point) had grown another X thousand people, and the highway went farther before it became two-lane. Akumal added a couple of hotels, a few more restaurants, and phones (at least on premise, if not in the casitas). But it's still a magical place. There's no night life, everything pretty much closes down by 9 or so, and the snorkeling/diving is spectacular.

The last time I visited, it was to participate in a Day of the Dead celebration for my friend's grandmother. Her ashes were brought into the country in a dive bag (they do sort of look like sand), and we prepared to distribute them in the bay. We created an altar, with some of her favorite things (chocolate and tequila), hired a local couple to prepare a fish feast for us, and later in the evening, we followed a Dutchman we had met who led us to the edge of the bay while he solemnly beat on a very large, empty Sparklets-type water container. Not a bad send off.

Another time there, we barely left the premises for almost two weeks. We dove twice a day, walked the beach at sunrise every morning, and read like crazy. Re-entry was extremely difficult that year.

I hope to return soon. http://www.locogringo.com/akumal/ 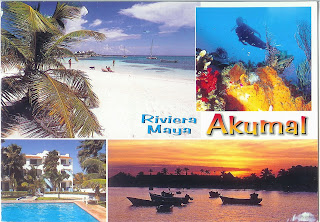 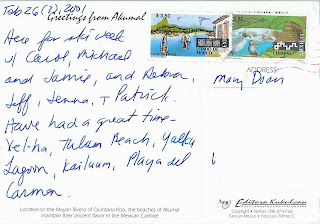