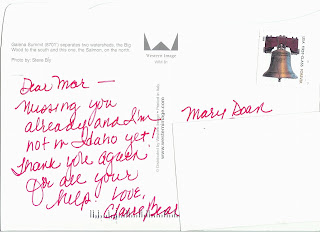 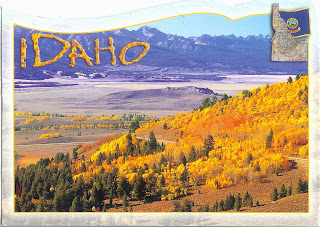 Idaho is probably starting to look like this right now, or if not, will soon. I like it when a state and/or country puts the shape of their geography on a card. And Idaho takes it one step further by creating a card with a shape at least reminiscent of the shape of the state.

We spent a week in Driggs, Idaho once. It is on the other side of the Tetons from Jackson Hole, Wyoming and a lot cheaper than Jackson Hole to live in. My friend, Michelle, and her family lived there.

The highlight in Driggs was a drive-in was called "The Spud". Parked outside the fence of this drive-in was a flat bed truck with a representation of a giant potato on it, one that spanned the length and width of the truck. On Wednesday nights, admission was charged per car rather than per person. Michelle had an old Winnebago one of whose purposes was to be packed full of kids on Wednesday nights, with everybody watching the movie from the roof of the vehicle. Inside The Spud was a ramshackle snack stand surrounded by broken down couches, so if you didn't want to sit in or on your car (or your Winnebago) you could splay out over the couches.
Posted by Mary at 7:19 AM