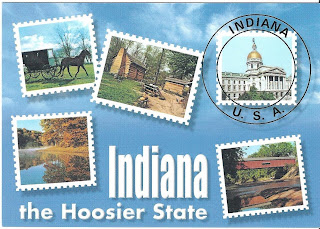 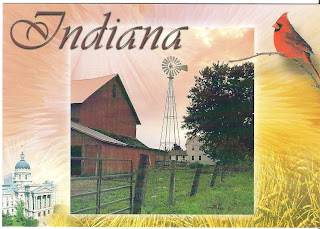 Indiana was one of the states for which I had no postcards.  A friend of mine has a sister who lives there, and she talked her sister into sending me the cards.  Still hoping for cards from North & South Dakota, West Virginia, Kansas, Vermont, and Nebraska.  Help!

So, what to say about Indiana?  To be honest, I can't find much.  Their nickname is the Hoosier state, although no one seems to know the origin of the term.   The Colts from Indianapolis are going to the Super Bowl this year - although I still think of them as the Baltimore Colts, even though they haven't played in Baltimore since 1984.  Perhaps we'll learn something about Indiana or Indianapolis during the pre-game warm up shows.

Here's something, in keeping with my on-going interest in dunes.  Indiana Dunes National Lakeshore, stretching from Gary, Indiana to Michigan City, Indiana along the shores of Lake Michigan.  Doesn't sound like there are that many dunes, but it looks like an interesting place for a hike.

There are a number of movies set in Indiana, among them Hoosiers, North by Northwest, a League of Their Own, and The Fugitive.  Kurt Vonnegut and Theodore Dreiser are both from Indiana and last but not least, who could forget the words to the song, Gary, Indiana sung by both Robert Preston and Ron Howard in the film version of The Music Man: