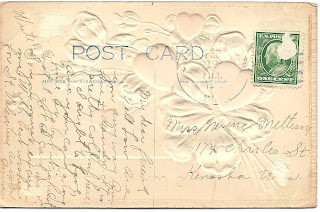 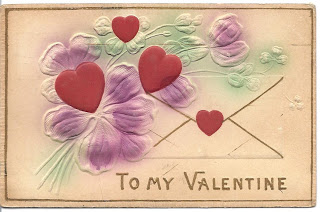 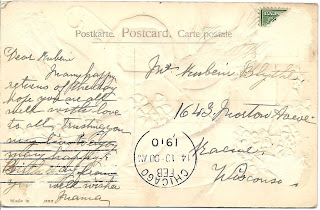 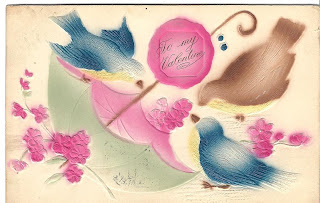 Two more unusual Valentines from 1910.  They are embossed and appear to be colored after the embossing, in a free form sort of way.  I suppose there is a name for this type of technique, but in all the 100-year old Valentines I've seen posted in the last few days, I haven't seen anything like these.

My cousin made a comment on yesterday's post: "I remember Aunt Amanda telling me that in her day Valentines were sent anonymously...like, you know, a secret admirer."  Our aunt Amanda was over 100 years old when she died, and that was in the early 80s.  She was probably around 25 or 30 years old when these postcards were sent.

Has the concept of "secret admirer" disappeared?  It didn't have to be romantic admirer, as I recall, just secret.  Any thoughts?
Posted by Mary at 12:21 PM