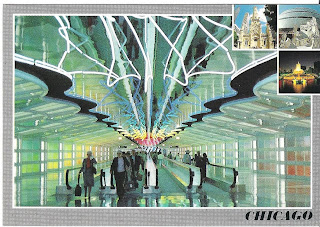 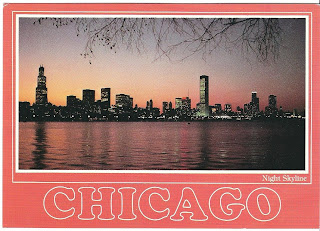 Illinois is a large state, ranking fifth in population in the US.  62% of the state's population resides in its northeast corner, namely in Chicago or in the greater Chicago area. I've visited Chicago multiple times, but have barely been outside its city limits except to visit Evanston, immediately to the north, and Oak Park, immediately to the southwest.  (I think.)

The first time I visited Chicago, around 1985, I went on the Wendella Boat Cruise.  Not only was it interesting to go through the locks from the Chicago River out onto Lake Michigan, it was fascinating from an architectural standpoint.  A lot of modern architecture was born in Chicago, and it was a subject I knew absolutely nothing about. That same trip I went to stay at my friends' in Oak Park, and went on a tour of Frank Lloyd Wright's house there.  More architecture, more learning.  My head spun.  I've never thought about architecture the same since.

One of the other things I really like about Chicago is its airport.  There was one Christmas I was travelling so much, I ended up doing quite a bit of my Christmas shopping in O'Hare airport during a layover, or waiting for a delayed flight - I don't remember which.  Whenever I am traveling through there, I always like going through the trippy corridors (see postcard above right), with the ever-changing neon lights and the music and the people movers.  It's borderline psychedelic.

A recent post of Michael Jordan's statue in Chicago can be found here.  I don't think the statue was there the last time I visited.
Posted by Mary at 6:40 PM