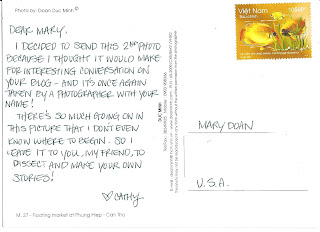 Cathy, the woman who cuts (okay, okay - and colors, too) my hair, has been traveling in Asia - Vietnam, Cambodia, and possibly Thailand.  She sent this postcard from Vietnam.

It brings up an interesting coincidence for me:  my last name is "Doan", and I am your typical, old school American mongrel - Scotch, Irish, German, English.  But "Doan" is also a Vietnamese name (as is the name of the photographer of this photo), and I am pretty sure I don't have any Vietnamese in my background, no matter how far back you go.

"Doan" in the Anglo-Saxon, derives from the Irish "Doane", and means low, rolling hills.  The first Doans came to the US in 1629, and it appears there were a group of Doans who were "robbers, felons, burglars and traitors".  Rapscallions, to say the least.

"Doan" in Vietnamese means "nice, elegant, united, friendly".  Not bad for a definition.  We had a friend who named his son "Eric" and one of his high school friends found a definition for Eric that meant "stinky hair".  That poor kid is probably referred to as "stinky hair" by his quasi-uncles to this day, and I think the mother is still not happy about this.

Not all language is derivative, and most likely there is no common ancestral name or term from which "Doan" in Vietnam and "Doan" in Ireland evolved.  There are only so many sounds humans are capable of making and sometimes, words just come out the same.
Posted by Mary at 11:22 PM