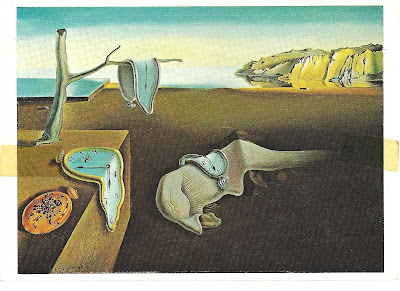 Time marches on.  When I looked at the calendar and saw it was the last day of February, that was the first thought that popped into my mind.

Turns out the card reflects that notion in more ways than one.

The obvious way:  there are images of melting watches/clocks on the card.

The symbolic way:  The painting is called "The Persistence of Memory" by Salvador Dali, and is considered his most famous. According to the text, "Many also consider that the melting watches were there to symbolize the irrelevance of time".  I don't know about irrelevance, as it is moving too fast to stop and notice relevance or irrelevance.

The historical way: Well, my history anyways.  The card was sent to me by my now husband, then boyfriend, to an American Express office in Rio de Janeiro in 1978.  My friend and I were traveling in Latin America that year, and the customary way to receive any mail was to have it sent to a couple of American Express offices along the route.  As we didn't have a time-based itinerary, our correspondents just had to guess when we might arrive at a certain city. It was in this way I learned my grandfather had died, when I went to pick up mail San Salvador, the first of our three mail stops.  In this case, the melting aspect of "persistence of memory" has occurred in my mind, as I can only remember the first (San Salvador) and last (Rio de Janeiro) mail stops.

The futuristic way:  It's a little over a month before I leave for Spain, and one of the places I hope to visit is the Dali Museum in Figueres, outside of Barcelona.  It looks absolutely amazing.

Time marches on.  Relevant or irrelevant, at least enjoy it while you have it
Posted by Mary at 4:54 PM