A Road Trip Through Oregon and Northern California

Here's something about postcards. You can take a week long road trip, not take a single picture, and still capture every place you've been and stayed.

It was time to take Clinton to University of Oregon to begin his freshman year. And, since I was driving to Eugene, Oregon anyways, I decided to make a road trip out of it. Here is how it went: 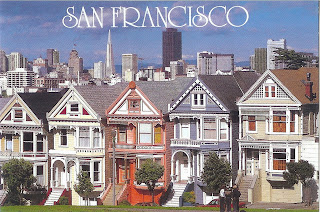 Clinton and I started off from San Francisco, Toyota van filled with clothes, lacrosse gear, bedding, towels, desk supplies, computer, etc. While we weren't stuffed to the gills, we were very full. As Clinton and I always do, we listened to music on his Ipod, while he quizzed me constantly about who the singer/band was, being very critical if I couldn't remember or didn't know. 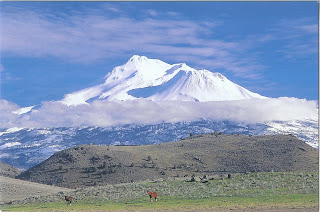 On the way up, we stopped in Weed at the base of Mount Shasta to visit our friend, Rob. He has a native plants nursery, Menzies Natives, and served as officiant for our wedding. As Clinton said, Rob is the most interesting person he's ever met. Rob graciously offered his home as a stopping point for Clinton if he ever needed it during a drive to/from Eugene/San Francisco.

(Postcard is of Mt. Shasta) 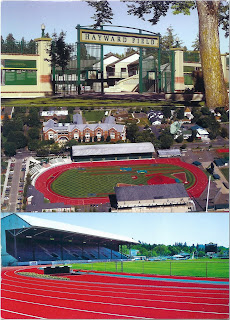 Clinton's dorm is directly across the street from Hayward Field, the track stadium at University of Oregon. We were among the first into the dorm, unpacked and organized by 12 PM. After one more visit to Bed, Bath & Beyond, where there was an amazing amount of U of O/Ducks gear, I tearfully but bravely left Clinton on his own and headed toward Bend.

(Postcard is of Hayward Field) 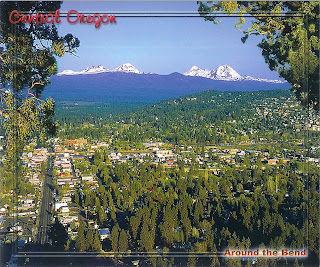 An incredible drive over the McKenzie Pass, on a scenic highway that is closed to traffic in the winter. It was a bit too early for fall colors, but it was clear that within a couple of weeks, it would be spectacular. Actually, it was a beautiful drive even without the fall colors.

I was headed to see some friends from high school, who married early and have lived in Bend for 30 years in a house they built on the Deschutes River. It was my friend's birthday and her daughter had invited three of us to come to Bend to surprise her. While I wasn't a surprise, having planned to stop there after dropping Clinton off anyways, I was a good red herring and when the other friends showed up, one from NYC and another from San Francisco, our friend was flabbergasted. We had an incredible time, talking and laughing, hiking and laughing, eating and laughing. Nothing, nothing, nothing beats a couple of days with old friends.

(Postcard is of Bend) 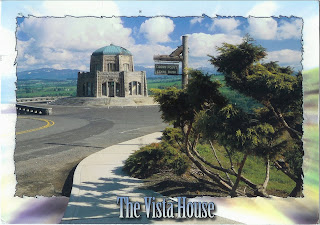 On Saturday, we drove to Hood River, to the house of my friend's daughter, for a birthday barbecue.

I had talked my mom into flying to Portland, and visiting with a friend of hers in The Dalles, 20 minutes from Hood River, with the idea that we would then drive down the Oregon and California Coast together.

After a nice bbq in Hood River, and an evening in a motel in Hood River where the owner had been murdered the week before (a little bit unsettling, to say the least), I picked up my mom and we headed south.

(Postcard is of Vista House, overlooking the Columbia River Gorge where Hood River and The Dalles are situated) 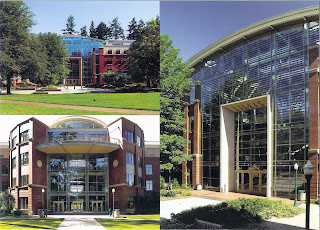 First stop, University of Oregon, so my mom could see the campus where Clinton will spend the next four years. He was excited and tired (perhaps a bit hungover?) from the previous day's football game (U of O beat Cal terribly, I'm sorry to say), and we had a very short tour of the campus, took him to lunch, and were on our way.

(Postcard is of some buildings on U of O campus) 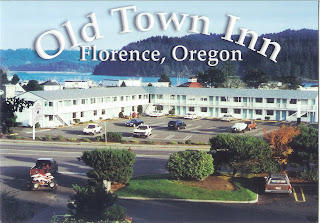 We had a reservation at the "Old Town Inn", and while "Inn" is a bit of an overstatement, it is a well run place. Florence is a port town (the Willamette River dumps into the ocean here) and a gateway to the Oregon Dunes State Parks. After a walk in the wind on the river jetty, we had a fantastic dinner at a local place, Side Street Bistro, and a great night's sleep.

(Postcard is of hotel - Freebie!) 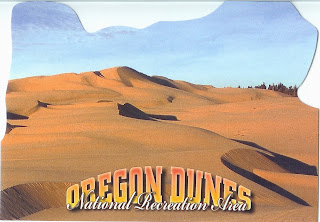 We got up early, so we could spend some time investigating the dunes before breakfast. If you like sand at all, you will love the dunes. They are nothing short of spectacular. In some parts, they are sand and sand and sand; in others, you can see where the pines and the sand do daily battle for dominance. Parts are off limits to motorized vehicles; other areas are replete with dune buggies and the tracks of three- and four-wheel ATVs. After a morning spent climbing up the sides of the dunes, you definitely feel it in your calves.

(Postcard is of Oregon Dunes, and in the shape of the state of Oregon. See other postcards in state shapes here and here.)

It's a bit unsettling at first, driving the Oregon and Northern California coast. As you come into towns, especially those on the mouths of rivers, you see a sign: "Entering Tsunami Danger Zone". Perhaps these signs have always been there, but after the tsunami in Asia a couple of years ago, they are a lot more noticeable. In any case, it's somehow comforting when at last you enter the Redwood Forests, after much driving on the coast. 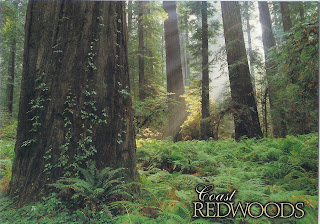 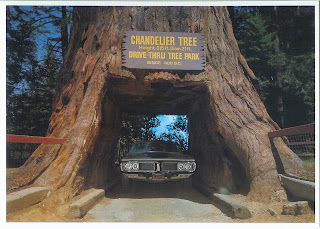 We drove the van through the Drive Through Redwood, with less than inches to spare on either side. For as majestic as the redwoods are, there's a fair amount of kitschy road side attractions: the drive through tree, the houses made of a single tree, and more. We had hoped to reach Mendocino that night, but we had had too much fun indulging our every whim, checking out random places that appealed to us, pulling off into scenic vistas, and climbing sand dunes.

Around 6 PM, we drove into Garberville. Definitely a Humboldt County town, with more hippies with back packs than I've seen in a while. As we drove around, trying to figure out where we might stay, the name "Benbow Inn" came up. My mom kept saying, "that sounds familiar". We checked, they had a room, so we headed that direction. As we pulled up, my mom realized she had stayed there as a little girl, probably at the age of eight or nine, during the 1930s, 70 years before.

The Benbow Inn is on the Eel River, which twists and turns its way through Humboldt County. The only time I'd been on the Eel River before was when we went to the Reggae on the River Festival, 15 or so years ago - a lot different than a stay at the Benbow Inn. This is a hotel to go back to, a destination for a road trip, a place to spend a lazy afternoon on the deck or a luxurious evening in the dining room and lobby. 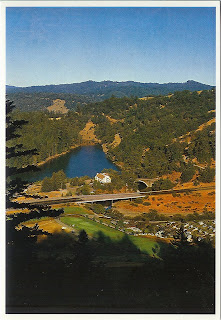 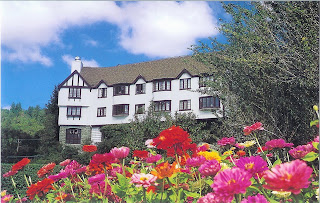 (Postcards are of Benbow Inn)


The next day, we decided to have breakfast in Mendocino, about two hours from Benbow. And while this wasn't exactly the direct route home, there was a stretch of Highway 1 I'd never driven, from Legget to Fort Bragg, so we did. It was a beautiful, clear, still, sunny, early fall day on the coast. We had our breakfast in Mendocino, wandered around a bit and then headed to the Oakland Airport via the Anderson Valley for my mom's 5 PM plane. 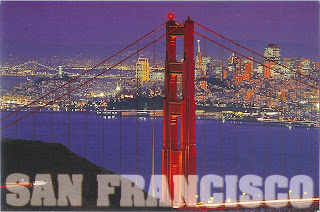