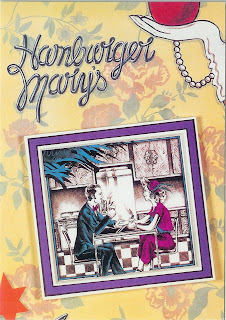 The very first week I moved to San Francisco circa 1982, a group of us from the ad agency went here for lunch one day. It was my initial immersion in classic pre-AIDs San Francisco - a place filled with the entire gamut of the then (and I suppose now, to a certain extent, but not so dot com) SOMA scene - leather boys, pierced and tattooed women and men, hippie-types, business people, tourists, gays and straights, all elbow to elbow in a place jammed with a cacophony of random paraphernalia. From the people watching to the paraphernalia, it was never ever a boring place. Even the creamers on the tables were baby bottles rather than metal pitchers.

Bloody Mary was across the street from The Stud, which, apart from the roving underground clubs, was a dancing haunt for me, pre-kids. I ate hamburgers here late at night, after dancing. I had a Bloody Mary here one afternoon when I was trying to get up the nerve to go into a leather store with two lesbian friends for a discrete purchase. (One had a crush on me and wanted me to try stuff on.) A really fun place, a San Francisco institution at the time, and one I hadn't thought of for a while.

Amazingly, there are reviews on Yelp for this place, even though it has been closed for years.
Posted by Mary at 7:07 AM