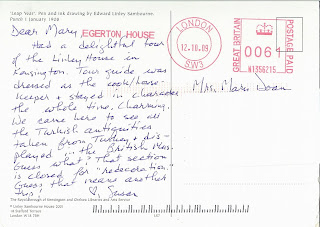 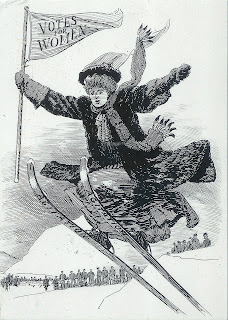 Only one postcard received yesterday, from my friend Susan. It must have been purchased at the Linley House in Kensington, which is open to the public as a period museum. The postcard is an illustration by Edward Linley Sambourne, who lived in the house and who was chief cartoonist for Punch from 1901 until his death in 1910.

It's interesting to note that this illustration is from 1908; the suffrage movement began in the United Kingdom in 1865. By the early 1900s, the movement felt it needed to take more extreme action. I believe that is what "agitation" on each ski is referring to. Remember the mother in "Mary Poppins"? I love the chorus in the song she leads, "Sister Suffragette".

Cast off the shackles of yesterday!
Shoulder to shoulder into the fray!
Our daughters' daughters will adore us
And they'll sign in grateful chorus
"Well done, Sister Suffragette!"

Voting rights for women in the UK weren't completely established until 1928.