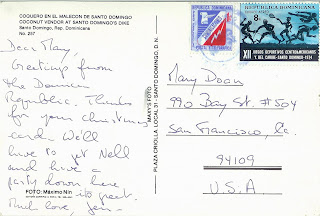 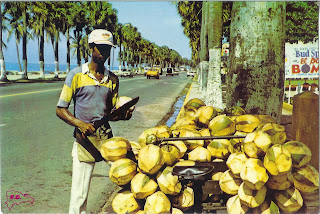 Historians cannot agree on where Columbus first touched land in "The New World". Most think it was on one of the Bahamanian Islands. Columbus himself named the island "San Salvador"; however, the debate is about which island is the genuine, original San Salvador. The islands most often considered are Watlings Island (called San Salvador today), Cat Island, and Grand Turk (once also part of the Bahamas).

It is agreed that wherever he first set foot, he didn't stay there very long. In fact, this is part of what drives the debate - there is no archaeological evidence of his first foot fall. Historians do know that he established his first "colony" on Hispaniola, the island comprised of both the Dominican Republic and Haiti.

Turns out, his arrival is celebrated in a variety of ways throughout the Americas. In the US, it is known as Columbus Day; in Costa Rica, Dia de las Culturas; in the Bahamas, Discovery Day; in Uruguay, Dia de las Americas; in Venezuela, Dia de la Resistencia Indigenas; and in many other countries in the Americas, Día de la Raza (Day of the (Hispanic) Race). Additionally, many in the US prefer to call it Indigenous People's Day.

So today, in honor of Columbus Day, I offer a postcard of the Dominican Republic. Whatever you call today, even if only Monday, enjoy it!
Posted by Mary at 6:57 AM