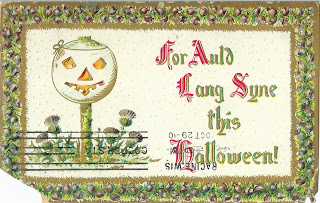 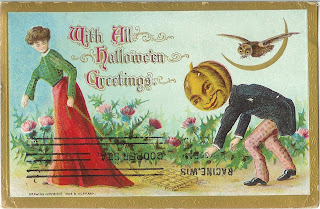 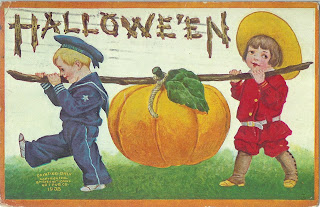 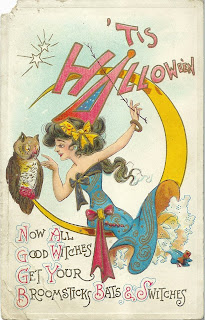 1) The use of the apostrophe in Hallowe'en in two of the cards. Most people know Halloween is derived from All Hallow's Eve, thus the contraction. What I don't know (maybe somebody does?) is when the apostrophe got dropped from common usage.

2) The use of "Auld Lang Syne". The song wasn't common as a New Year's Eve song in the US until Guy Lombardo popularized it in 1929. It must mean something like "For old time's sake this Halloween".

3) The hint of risque. Both the pumpkin headed man chasing the woman and the witch swinging on the moon have a hint of risque about them, certainly for the times. My friend whose collection these are from tells me that many of the cards she has from this time feel a little frisky. In looking up "Postcards 1910" I discovered that Wikipedia has a category "postcards by year". I didn't discover any risque ones. (Might have to post a few cards from my collection, as their offering is thin.)
Posted by Mary at 7:32 AM