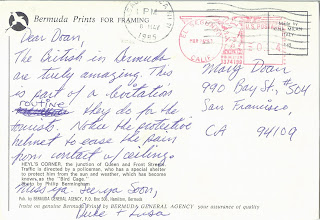 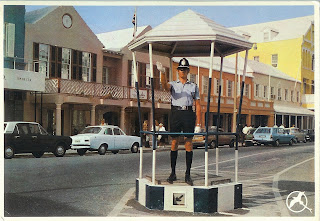 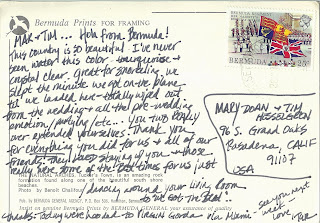 You don't hear much about Bermuda on the West Coast anymore. It reached its peak as a tourist destination in the 60s and 70s, and is now more of an international business center. I was surprised to read that in 2005 it had the world's highest GDP per capita. It might just be too expensive. And, it's an Atlantic, not a Caribbean, island.

The other thing you don't hear much about anymore is the Bermuda Triangle. Read about it here, as well. And finally, is the descriptor "Bermuda shorts" still in use?

The two postcards above were sent in the 80s. The message on the first, showing the traffic cop, is very funny, but it took me a minute to get it. It's a typical example of my friend Duke's sense of humor, describing the levitation capabilities of the locals. Read it!

The second was sent by my sister from her honeymoon. It reminded me of her wedding, 20 something years ago, which lasted a week and was tons and tons of fun. A very popular song at the time was the GoGos "We Got the Beat". As I recall, we played it incessantly and danced like crazy every time we did. How can that be so long ago?
Posted by Mary at 7:14 AM