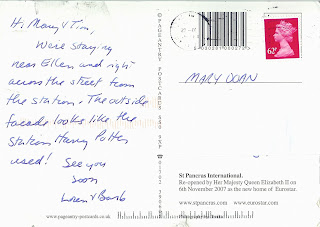 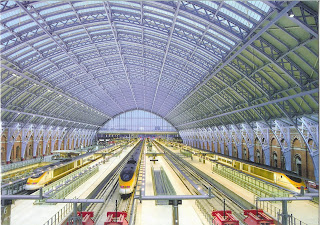 There's nothing quite like a train station. The expanse, the high ceilings, the cavernous sound, the birds flying around, the people bustling through, the realization that multiple huge locomotives fit inside....

This is the recently renovated St. Pancras Station, now the station for the Eurostar arrival in London. This is the inside, but check out a picture of the outside. As the postcard says, it looks like the train station where Harry Potter boarded the Hogwart's Express. It may well have been the location used in the movie.

The Eurostar used to arrive in London at Waterloo station. One of the cutest pictures of my kids is the two of them, ages six and eight, disembarking from the Eurostar in Waterloo station, having just arrived from Brussels, pulling their little wheely suitcases behind them. International globe trotters at an early age!
Posted by Mary at 1:17 PM