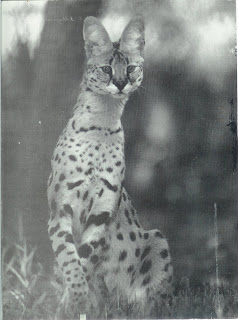 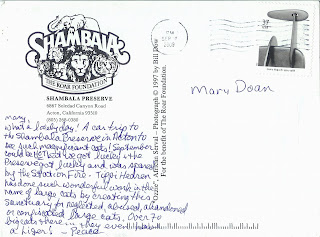 Tippi Hedren, of Alfred Hitchcock's Bird fame, founded a center called the Shambala Preserve, in the high dessert in Southern California.  It is home to almost 70 exotic felines, including the serval named "Ozzie" pictured above, as well as "lions, tigers, cougars, black and spotted leopards, servals, bobcats, Asian leopard cats, a jungle cat, a lynx, and one very magnificent liger".

I have a cat, Sunshine, who isn't exactly an exotic feline but she's a beautiful cat.  She is particularly devoted to me, and she and my husband do battle over who might get my attention.  My husband thinks the cat wins too often.
Posted by Mary at 11:08 PM