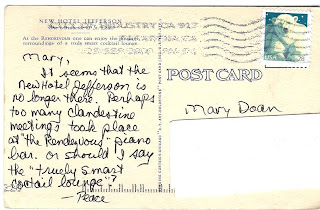 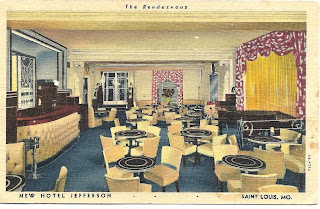 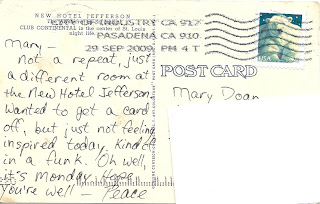 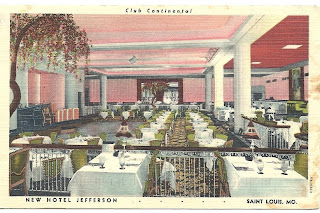 They don't call bars and restaurants "The Rendezvous Room" or the "Club Continental" any more.  It's too bad, really.  These names have an air of elegant sophistication, or at least a little bit of intrigue about them. This is due in part to the fact that  I have always been partial to alliteration.  But it is also because there is no cynicism in these names; they weren't meant to be ironic.  The names were simply a sign of the times.

As the Mystery Sender writes, the the New Hotel Jefferson doesn't appear to exist any longer.  There are lots of "Jefferson" named places in St. Louis, but no New Jefferson Hotel.  It's a pity.  I would love to see a room that still looks like the Rendezvous Room, or make an appointment to rendezvous with someone there!
Posted by Mary at 6:18 PM