The Cantons of Switzerland 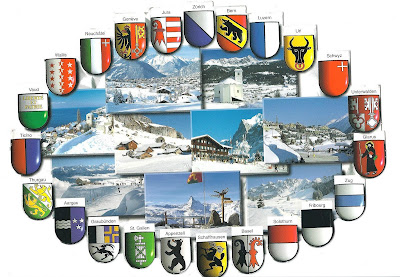 All this Winter Olympic stuff got me thinking about the variety of winter sports places in the world.  I don't begin to claim that I've got postcards from all of them, but I did recently receive this one from Switzerland.

Not only does it show several winter sports areas, it also features the flags of the 26 cantons of Switzerland.  Of course I had to count, and in fact there are only 23 flags in the postcards above.

What gives with that?  Turn out six of the cantons - Unterwalden, Appenzell, and Basel - are "traditionally, but no longer officially, called 'half-cantons', reflecting a history of mutual association or partition."  Unterwalden is made up of Obwalden and Nibwalden, Appenzell of Appenzell Ausserrhoden and Appenzell Innerrhoden (Outer and Inner Rhodes), and Basel of Basel-Stadt and Basel Landschaft (Basel -city and -country).

When I was on business in Switzerland a few years back, I had dinner with a local colleague.  He served a traditional Swiss dish, Raclette, which is a melted cheese that you put on potatoes and/or other vegetables.  Delicious!  He also showed us his bomb shelter in their basement. Turns out every household in Switzerland is required to have a bomb shelter, and if a new house is built and you don't want to include a bomb shelter, you can contribute a fee toward a communal bomb shelter.  Most are used for storage, and no longer necessarily stocked with food and water, as originally required, but there are more bomb shelters in Switzerland per capita than any other country in the world.

From Widipedia:  Switzerland built an extensive network of fallout shelters (mainly through extra hardening of government buildings such as schools) of a scale to protect and feed the entire population for two years after a nuclear attack. This nation has the highest ratio of shelter space to national population of any country. All these shelters are capable of withstanding nuclear fallout and biological or chemical (NBC) attacks but the blast-proof requirement varies depending on the size of the building. The largest buildings usually have dedicated shelters tunneled into solid rock. Similar projects have been undertaken in Finland, which requires all buildings with area over 600 m² to have an NBC shelter, and Norway, which requires all buildings with an area over 1000 m² to have a shelter.
Posted by Mary at 4:35 PM