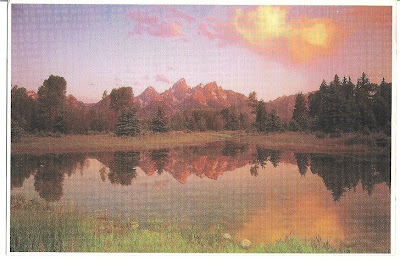 Continuing on the theme of winter sports areas in the world, here we have the Grand Tetons, although this picture is taken in Grand Teton National Park in the summer rather than the winter.

The winter sports areas in the Grand Tetons include Jackson Hole, Snow King and Grand Targhee.  Jackson Hole and Snow King are in Wyoming; Grand Targhee is on the other side of the Tetons, outside of Driggs, Idaho (featured earlier in the blog as the home of The Spud Drive-In) but maybe just on the state line and still in Wyoming.   When we visited Driggs, Idaho our friends' family ran the Teton Tepee Lodge, and we helped bartend and serve for a wedding reception.   Our friends told us that sometimes it snows there as late as July and as early as September.  Doesn't make for a very long summer!

My mom sent me this postcard from her collection of a few she's saved over the years.  On it she writes that she remembers camping here in 1941, right before WWII began, and seeing moose in the meadows near the lakes.  I think it's a little too crowded for that now.