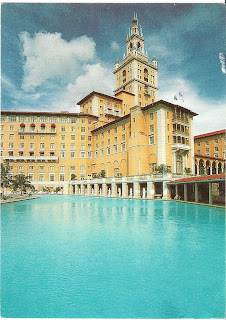 In 1995, I was invited by Sports Illustrated Magazine to go to Super Bowl XXIX in Miami to see the San Francisco 49ers (my home team) play the San Diego Chargers.  It was the best business perk I ever had.
We were flown from San Francisco to Miami, and whisked to the Biltmore Hotel (seen here) in Coral Gables outside of Miami.  This Biltmore Hotel claimed to have the largest pool in the world, at least at that time, and the hotel itself became our playground for the next couple of days.  I can't imagine a better host than Sports Illustrated;  they held a variety of events, including a big dinner reception where there was a huge copper pan of paella the size of a satellite dish, well-known sports figures, writers from the magazine, and a bevy of magazine sales reps eager to entertain us.  At one point, a group of us decided we wanted to go into South Beach, and a small bus appeared to take us there.  It happened that a number of the advertisers who had been invited were couples with relatively young children, like us, who hadn't been away without the kids for a while.  We were all in the same mindset - "we're free", and behaved accordingly.
But game day itself was the highlight.  We were loaded on busses to travel to the stadium, and we all wondered how bad the traffic would be.  For the three Sports Illustrated busses, no problem.  We had a police escort from the hotel to the stadium, which literally cleared a path for us on the freeway.  You could see people in the cars who had been pushed to the side looking at our busses, wondering, "Who's in there?"  At the stadium itself, there was a Sports Illustrated by invitation only hospitality tent, and when at last it was game time, we were taken to the Sports Illustrated luxury box, where we sat with the publisher, Tom Brady, and, during the third quarter, Mean Joe Green.  As icing on the cake, the 49ers won the game.
I still have a canvas bag and a couple of plastic cups from this outing.  The beach towels and the stadium seats they gave us, all emblazoned with the Super Bowl XXIX and Sports Illustrated logos, and some of the other tchotches have long since disappeared.  I attended one other Super Bowl in Phoenix, when the Dallas Cowboys played the Pittsburg Steelers.  I've been to the Final Four at the Superdome in New Orleans.  I've  attended World Series and NBA playoff games.  However, nothing will ever top this trip to the XXIX Super Bowl! 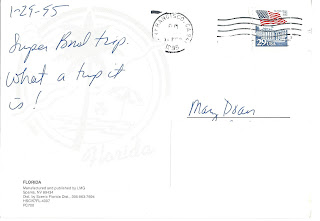 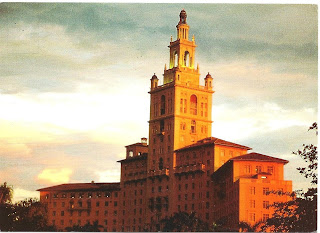