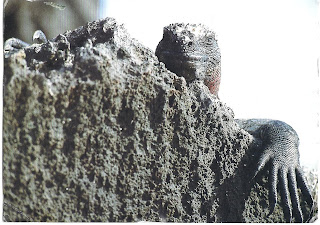 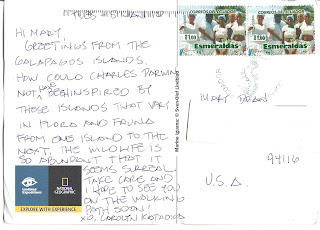 I received this postcard in the mail yesterday, sent by my friend Carolyn, from the Galapagos Islands.
Most school children learn that the Galapagos Islands were the inspiration for Charles Darwin's theory of evolution by natural selection, although the natural selection part of said theory is often left out of the discussion.  What they might not learn is that there are 15 major and three minor islands comprising this equator-straddling volcanic archipelago.  Many of the islands were originally named by the bucaneer Ambrose Cowley after "some of his fellow pirates or after the English noblemen who helped his cause", but more recently were assigned Spanish names by the Ecuadorean government.  Many visitors, especially ecological researchers, continue to use the English names as those were the names used when Darwin visited.

The Galapagos is one of too many world heritage sites in danger of being both loved and exploited to death.  Interesting to read that there are 700 non-native species on the islands, introduced either intentionally or not, compared to 500 native species.  For example, "in 1959, fishermen introduced one male and two female goats to Pinta island; by 1973 the National Park service estimated the population of goats to be over 30,000 individuals."   Wow.  That's some population explosion!  Imagine what it does to the native plants and animals.

Althought it doesn't say, the picture on the postcard is most likely a Marine Iguana (as opposed to the Galapagos Land Iguana).  The Marine Iguanas are not found anywhere else on earth, and when Charles Darwin encountered them he described them as follows:  "The black Lava rocks on the beach are frequented by large (2-3 ft), disgusting clumsy Lizards. They are as black as the porous rocks over which they crawl & seek their prey from the Sea. I call them 'imps of darkness'. They assuredly well become the land they inhabit."  Pretty harsh description for an ocean-going, green algae eating lizard.  I think its picture is cute, in a reptilian sort of way.
Posted by Mary at 11:36 AM