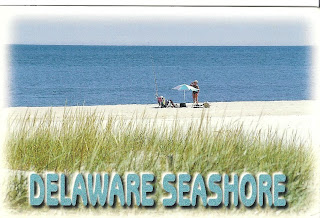 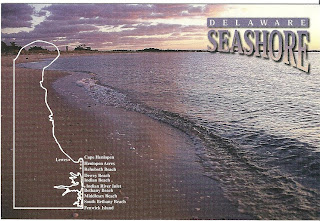 It's a good enough time as any to begin another week of United STATES postcards, beginning with Delaware. Delaware is the second smallest state in the US, but the 6th in population density, and was the first state to sign the Declaration of Independence which, of course, is the basis for their license plate claim : "The First State".
I can't say the name "Delaware" without song lyrics running through my head: "What did Della wear, boys? What did Della wear?" The answer was something about her "new jersey". I always thought it was a camp song until I looked it up. The song was recorded by Perry Como, which you can hear here, and there are additional verses about states beyond those about Delaware and New Jersey. However, the song appears to have originated as an election jingle in the early 30s as part of a presidential election, probably that of FDR's first campaign. How it was used is hard to imagine.
I'm lucky enough to have been to Delaware multiple times, as good friends have a beach house in Bethany beach and they invited us to visit, more than once. (Thanks, Jack & Lor!) The view from their porch in Bethany Beach is pretty much that of the postcard on the right. For my previous post about Delaware and Bethany Beach, click here.
Posted by Mary at 10:23 AM