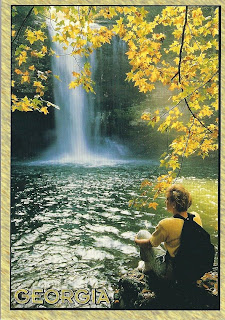 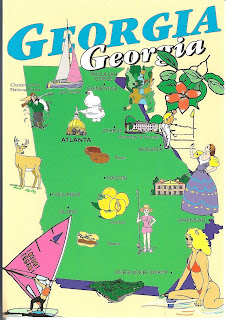 My sister lived in Atlanta for almost 20 years, and we visited her there a handful of times.  Once we were on a family road trip, having driven to Atlanta from Bethany Beach, Delaware.  I remember that I read the 5th Harry Potter book aloud to my kids almost the entire drive from Charleston,  South Carolina, to Atlanta.  That was a lot of reading aloud.

While in Atlanta, we went out to the mountains and spent a day canoeing on a river that looked sort of like the postcard on the right, except that the river was very low and at times we  had to portage the canoes.  It was a typical canoe trip, complete with water fights between the canoes (sneak attacks, of course), graceful lurches in and out of the canoe, and lots of laughing.  We also attended a Bo Diddly concert in Chastain Park in an outside amphitheater.  People brought picnics, some complete with candleabras, and enjoyed his music sitting outside in the very hot, very sticky summer air.  For a San Franciscan, more accumstomed to foggy summer nights, to be outside under the stars and clouds, with fire flies blinking about was excellent.

It was a surprise to me that the city of Atlanta has a population of less than 600,000 inhabitants.  My guess would have been over a million.   However, its metropolitan area is 8th in the country with 5.4 million people.

I love the postcards that feature a state map.  On this map, you see the things you would expect on a map from Georgia:  golfers, wind surfers, and a hunter.  HUH?  Well at least the peach blossoms, pecans, a southern belle, and a mansion that looks like Tara are what you'd expect.  I also see the the Okefenokee Swamp is at least partially in Georgia, straddling the border with Florida.  It is one of the largest swamps in the world.

The postcard maps always remind me of the reports we did on states in elementary school:  major cities, key crops, iconic symbols.  Or even of the murals we painted on butcher paper on the walls.  I particularly remember the one we did for Mexico. (I realize Mexico is not a state.)  Growing up in Southern California very near the San Gabriel Mission, we were aware, if not knowledgeable, about a lot of the iconic symbols of Mexico at the time - donkeys, sombreros, missions, cactus, etc.  Think cheesy Tijuana souvenirs from the 60s and you'll have an idea of what that mural looked like!