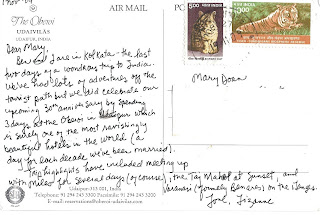 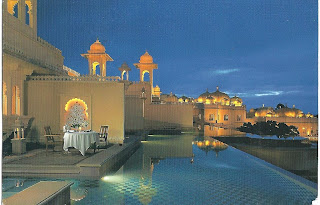 The Oberoi Udaivilas, Udaipur, India. Wow! I'd like to have dinner at that table by that pool.

Check out the website for the resort here. As my friend says in her postcard, it is "surely one of the most ravishingly beautiful hotels in the world". I don't think she is exaggerating.

The city of Udaipur itself was rated "The Best City in the World" in a Travel & Leisure poll in 2009. Known as the Venice of India due to the preponderance of lakes, it is home to numerous castles, particularly from the Rajput era (11th-13th centuries).

Interesting to note that Rajput refers to a major warrior group in India, and includes Hindus, Muslims, and Sikhs. At the time of Indian independence, more the 600 of the 800 princely states in India were ruled by Rajputs.

I suppose I am becoming an armchair traveler (or desk chair in my case). I know the term, I've used the word, but I'm living the meaning: be exposed to a place, look it up, research its location and history and any other interesting tidbits, and voila, something new learned. In fact one of the postcard bloggers from Postcard Friendship Friday calls her blog "Sandy, the Armchair Traveller". I understand better now what she's trying to say and do.
Posted by Mary at 4:48 PM