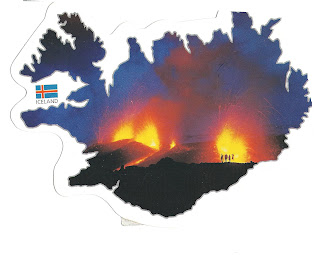 Another bucket list alert, this time for Iceland. I am intrigued by Iceland on a variety of levels.

One is its geographic isolation. Yes, there are more isolated places, but Iceland sits out in the middle of the North Atlantic, and only the North Atlantic Current keeps it from being friggin' freezing (to quote Dr. Evil).

Another is its geologic make-up. It is a land of volcanoes, geysers (although there are more geysers in Yellowstone than in all of Iceland), the largest water fall in Europe, and a more temperate climate than its latitude would suggest.

Finally, I'd just like to be in a place with names like "Reykyavik" and "Haukadular". I want to hear how these words, and others, sound spoken by the people who live there.

Before its financial meltdown in 2008, Iceland was ranked the most developed country in the world according to the UN's Human Development Index. It might not be #1 today.

The stamps on this postcard. were also interesting.

Wondering what "Brokk" meant, I looked it up, thinking it was a type of horse. It turns out there is only one breed of horse in Iceland, not surprisingly the Icelandic Horse, brought to Iceland by the Viking settlers in the 9th century. The horse is uniquely five-gaited and "brokk" is the name of its trot. It has never been bred with any other type of horse, and is the only horse that can live on grass alone. (At least that what the first site says - what about Wild Mustangs????)
Today is Postcard Friendship Friday, so if you have a chance, check out some of the other postcard sites.
Posted by Mary at 7:17 AM