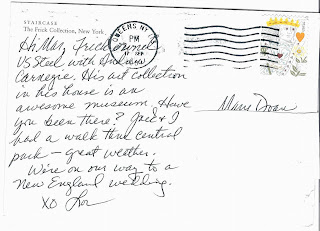 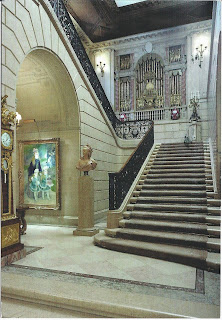 The Frick Collection on 5th Avenue in New York City is home to a permanent collection of more than 1,100 works of art from the Renaissance to the late 19th Century.

While it is not the largest museum in the United States, it "has played a very significant role in collecting and connoisseurship in the United States. The types of paintings collected by Mr. Frick deeply affected the taste of Americans in the decades after his death — first and foremost, that of Andrew Mellon, his close friend, and other collectors who gave to The National Gallery of Art in Washington, D.C., founded by Mellon." (From the Frick Collection website)

There is an interesting array of painters represented here, a few of whom I'd be particularly interested in seeing:

There are multiple works by Whistler (of Whistler's Mother fame).

Thomas Gainsborough, of Blue Boy fame which hangs at the Huntington Library in my home town, has a number of paintings at The Frick.

There is a series of paintings called "Arts & Sciences" by Francois Boucher, which includes pairings like "Fowling and Horticulture", "Architecture and Chemistry", "Astronomy and Hydraulics" and "Singing and Dancing".

Finally, who wouldn't want to see paintings by Turner and Constable?