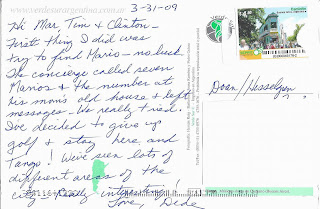 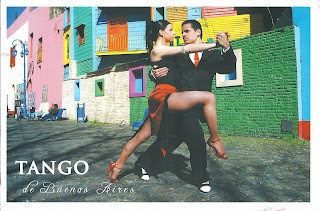 This pose was probably shot in La Boca, the originally Italian section of Buenos Aires, which is filled with street after street of colorfully painted houses. These colorful houses are a vivid visual memory from my visit to Buenos Aires that has stayed with me for years. The image of these brightly colored streets comes to me when I wander around the often foggy, beige and grey Sunset District of San Francisco in which I live. It makes me think that my neighborhood could benefit from more colorful paint a la La Boca.

The Tango originated in Argentina, and quickly spread to the rest of the world. My friends, Gayle and Paul, learned and danced a very lively tango as the first dance on their wedding day. The dance has evolved into a variety of versions, but the one I find most surprising is the Finnish Tango, which flourished during the 1950s.

My mom went to Argentina in April, and while several postcards arrived on a relatively timely basis, this one must have been stuck in limbo somewhere because it just showed up about three weeks ago.
Posted by Mary at 10:16 AM