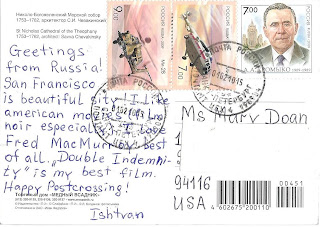 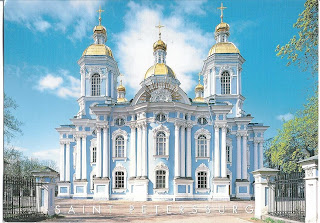 The thing that surprised me the most when I visited St. Petersburg was the colors of the buildings - all painted pastel with white trim.  Like the pale blue in the church above, but also pale greens, pinks and yellows, and on all types of buildings, not just churches.  It is quite beautiful, actually.

I was lucky enough to be in St. Petersburg during the White Nights, around the time of the summer soltice when the sun does set, but the sky never really gets dark.  St. Petersburg is the most northern city in the world with a population over one million, at about the same latitude as Oslo and Anchorage.

The references to the White Nights I've found on-line talk about six weeks of the White Nights Festival.  I don't remember any sort of festival, but I do remember that we were there on the day of the actual summer solstice.  It seemed the entire city stayed up all night, mostly hanging out by the river, watching the bridges raise to let ships pass through, enjoying fireworks and drinking vodka.  It was pretty wild and wonderful all at the same time.

This postcard comes to me through Postcrossing, but unfortunately the sender neglected to put the reference number on the card so I can't let him know it arrived.  So Ishtvan in St. Petersburg, if you happen to read this, "Thanks for the beautiful card!"
Posted by Mary at 7:25 PM