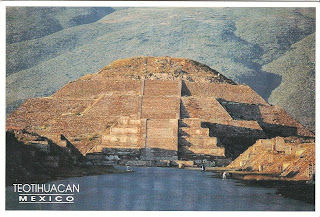 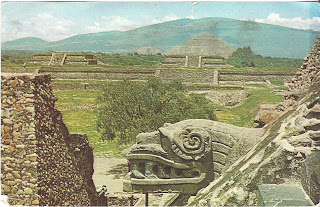 Teotihuacan, in the state of Mexico in the country of Mexico, is a UNESCO World Heritage Site, and one of the most visited places in all of Mexico.  My family and I spent Good Friday here in 1998.

We had arrived in Mexico City the night before, on our way to a spring vacation in the Yucatan.  Mexico City is a bustling, busy, dirty city, either the third or sixth largest urban agglomeration in the world, after Tokyo, Delhi, Sao Paolo, and Mumbai, and when we arrived in the late afternoon it was packed with cars and people.  However, when we awoke Friday morning, everything felt eerily quiet. We looked out the hotel room window and saw a city that was almost completely empty - of people, of cars, of busses, everything.  It was unbelievable.  Who would think a city could shut down and all the people disappear overnight like that? But of course!  Good Friday in a predominantly Catholic Country. [Side note:  Speaking of Good Friday in a predominantly Catholic country, I read in the paper today that this coming Good Friday (next Friday), the pubs in Ireland will be open for the first time ever on a Good Friday, due to a giant rugby tournament, and the influx of thousands of thirsty rugby players and fans.  This struck me as being pretty funny.]

Sometimes you just get lucky.  We hired a driver to take us out to Teotihuacan, and when we arrived, saw throngs of people climbing the stairs of the Pyramid of the Sun.  We joined in, happening to reach the top of the pyramid at high noon.  There must have been a hundred people or more on top of the pyramid (it's really big), and every one of them had their hands raised over their heads and their faces turned to the sun, paying homage on Good Friday, I suppose.  "When in Rome," as they say, so the kids and I joined  in.  It felt tribal and spiritual and mystical, all at once, and we were a bit giddy afterwards.

If you get a chance, click on the link to the wiki on Teotihuacan.  The site is huge, with two pyramids (besides the Pyramid of the Sun, seen in the postcard on the left, is the Pyramid of the Moon, which can be seen in the far distance on postcards on the right) and a main boulevard called "Avenue of the Dead".  There's lot that isn't known about the place including who the people were who lived here, in a city estimated to have a population of up to 250,000 inhabitants at its peak.

Finally, it's Postcard Friendship Friday, with multiple postcard bloggers participating.  Check it out!
Posted by Mary at 1:19 PM