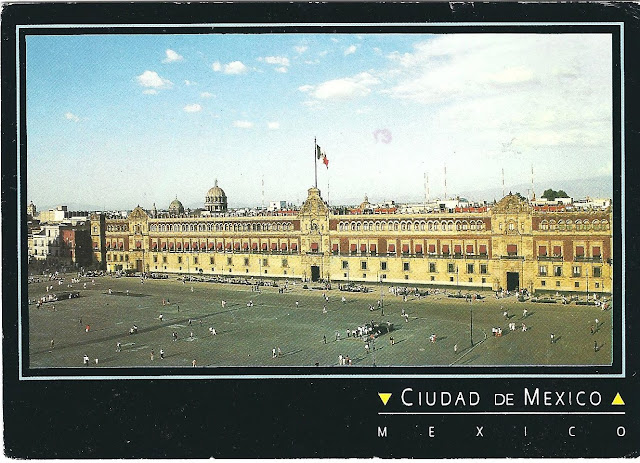 Mexico City is in the Distrito Federal, which is pretty much like the District of Columbia in the US.  Wikipedia describes it as follows:  "Mexico City is also known as the Federal District (Distrito Federal), a federal entity within Mexico which is not part of any one of the 31 Mexican states in particular. Instead, it belongs to the federation."  I wrote a little yesterday about the city ("Mexico City is a bustling, busy, dirty city, either the third or sixth largest urban agglomeration in the world, after Tokyo, Delhi, Sao Paolo, and Mumbai", but wanted to say a bit more.

The postcard above shows the National Palace and the Plaza de la Constitucion, often referred to as "Zocalo", which has come to mean center of town in many cities in Mexico.

It is from the balcony above the central doorway (directly below large Mexican flat in the postcard) that the president of Mexico leads "el grito".  Wikipedia describes it well:  Above the central doorway, facing the Zócalo, is the main balcony where just before 11pm on September 15, the president of Mexico gives the Grito de Dolores, in a ceremony to commemorate Mexican Independence.   What Wikipedia doesn't say is that "el grito" is made up of the president yelling "Viva", and the throngs of people (the Zocalo is filled to capacity, with up to half a million people attending) responding "Mexico".  The Taco Bell commercials featuring the chihuahua from several years ago had a spot that had the chihuahua leading "el grito".  It was not received particularly well by Mexican-Americans.  It is also commonly thought in the US that Cinco de Mayo (May 5th) is Mexican indendence day, when in fact it is September 15.  Cinco de Mayo commemorates the Mexican' army's  victory over the French in 1862.

Another interesting bit of information about the National Palace is that the site has been "a palace for the ruling class of Mexico since the Aztec empire, and much of the current palace's building materials are from the original one that belonged to Moctezuma II.   According to legend, the gods had advised the Aztecs that the place where they should establish their city was to be identified when they saw an eagle, perched on a prickly pear tree, devouring a serpent. They saw this mythical eagle on a marshy lake that is now the zócalo or main plaza in Mexico City.
Posted by Mary at 5:43 PM