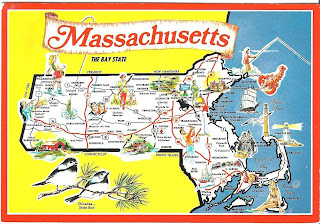 I hadn't finished the series of seven states before St. Patrick's Day intervened, so here's the last one of the series - Massachusetts.
As I may have mentioned before, I love the postcards that show an entire state.  In the case of this one, it shows not only towns but also the state bird, the Chicadee, and the state nickname, the Bay State.  On the back of this card is written the state motto:  "By the sword we seek peace, but peace only under liberty."  Appropriate motto for a state that figured so prominently in the American Revolution. 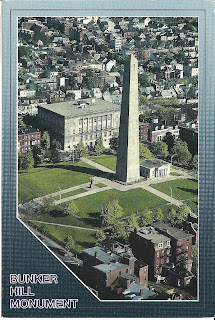 A visit to Boston, Massachusetts has to include time spent walking the "Freedom Trail", ending (or beginning, depending on your perspective) at the Bunker Hill Monument, seen in the postcard to the left.  American history really comes alive when you walk this trail, especially for somebody from California (me) which is pretty far removed from the original 13 colonies and all their incumbent history. 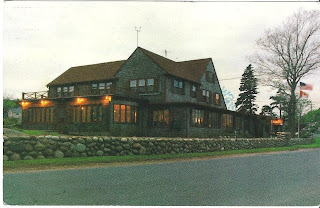 I used to travel frequently to Chelmsford, Massachusetts, about two hours north of Boston.  Usually, we flew in in the evening, drove to Chelmsford, got up early for meetings and drove back to catch the last flight back to San Francisco.  However, one time,  I drove my rental car to Rockport (home of the shoes), and stayed in the lovely inn to the leftjust for the night.  I was determined to see something of Massachusetts other than Boston and Chelmsford and the Interstate (93) that connected them, so I did.
Posted by Mary at 7:23 PM