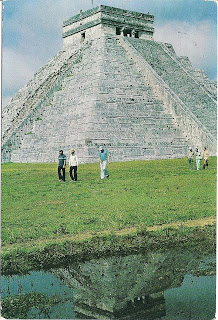 Chichen Itza is in the state of Yucatan, in Mexico. It is listed as one of the new seven wonders of the world.  1500 years old, it is a UNESCO World Heritage site, and the most famous of all the Mayan ruins.
The postcard above shows El Castillo ("The Castle"), the iconic image of Chichen Itza. However, the ruins are also known for the famous ball court (if you lost the game, you lost your life) and the Cenote Sagrado, where archaelogists have discovered bones that bear the tell tale signs of human sacrifice.  (Remember the movie "Apocalypto"?)
I visited Chichen Itza in the late 70s. We stayed in the one hotel nearby, which not only wasn't that near but also promised a pool which turned out to be filled with slimy green water.  However, there weren't tons of visitors if you got there before any tour busses arrived and we were able to climb up and down El Castillo.  I remember that those stairs were pretty steep,  and in 2006 a tourist feel down them and died.  For that reason as well as the impact of being loved to death (too many people), these days visitors are permitted to wander the grounds only.
Saturday was the Vernal Equinox, and on that day in the late afternoon, the shadow of the sun creates the image of a giant serpent moving down the steps of El Castillo (there are serpent heads on either sides of the stairs at the bottom of the structure).  Thousands of people gather to see this phenomenon.  Note the difference in numbers of people in the postcard below: 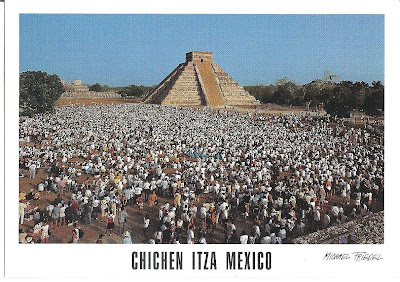 Elton John is peforming at Chichen Itza on April 3 this year.  It will be the third concert by a global mega star at the ruins, and is somewhat controversial.  The concert is sold out and I imagine the crowds will be as bad, if not worse, than those in the postcard above.
Posted by Mary at 1:44 PM