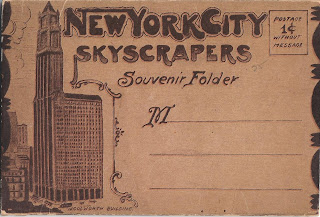 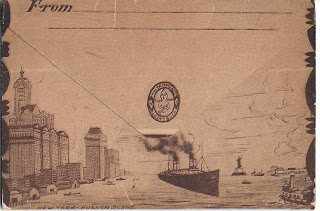 This "New York City Skyscrapers Souvenir Folder" features 22 fold out postcards, primarily skyscrapers, from around 1915.  It is printed by the H.H. Tammen Curio Company which, according to the Metropolitan Postcard Club of New York City was "a novelty dealer and important publisher of national view-cards and Western themes in continuous tone and halftone lithography."  They were located in Denver, Colorado and in business from 1896-1953. 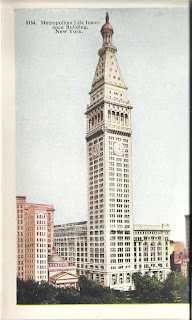 Here's one of the Metropolitan Life Insurance Building, located at One Madison Avenue, and which, with 50 floors, was the tallest buildling in the world from 1909 to 1913.  It is not to be confused with the Met Life Building which didn't open until 1963. 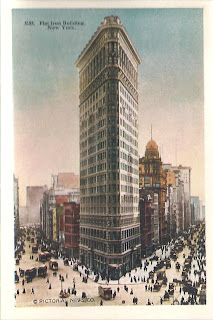 And here's the Flatiron Building, considered  to be among the first skyscapers ever built (1902) and located at 175 5th Avenue.  I could swear there was a movie about a music company located in the Flatiron building, and the song writers working there in the 60s, but I only find (among others)  "Spider Man", the 1998 version of "Godzilla", and the opening credits of "Late Night with David Letterman" as movies/television shows that feature the building.