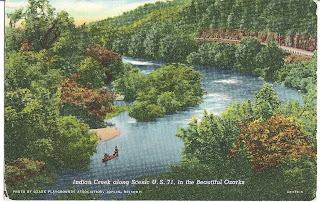 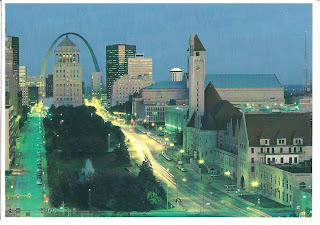 In my collection of postcards, for several states I have postcards only of the major city, probably because many of these cards I sent to myself or to my  kids from business trips.   For Missouri, I got lucky.  Turns out the Mystery Sender had sent me the card on the right, allowing me to show both urban and rural parts of Missouri.

For the urban view, a street shot of St. Louis, looking toward its quintessential icon, the Gateway Arch.  The arch is a monument to the westward expansion of the United States, and was designed by Eero Saarinen.  [Random side bar:  Saarinen also designed, with Charles Eames, the Tulip Chair, popularized by its appearance on the original Star Trek television series in the late 1960s.]  For the rural view, a shot of Indian Creek, along "scenic U.S. Route 71 in the Beautiful Ozarks",  located in the far southwest corner of the state.

In thinking about Missouri, I found myself curious as to why it has an uneven southern border with a chunk of the state encroaching into Arkansas.  Called the "Bootheel", there is some debate as to how this came to be.  According to the Wiki, the bootheel originated in the request of some Missourian to remain in the state "as he had heard it was so sickly in Arkansas;" ""...full of bears and panthers and copperhead snakes, so it ain't safe for civilized people to stay there over night even." Another folktale has the adaptation made by a lovestruck surveyor to spare the feelings of a foolish widow living fifty miles south of the Missouri border, but unaware of it. At one time, the area was known locally as "Lapland, because it's the place where Missouri laps over into Arkansas".

Whatever the origin of its border, Missouri shares the distinction with Tennessee of being one of only two states that share borders with eight separate states.  In Missouri's case the states are  Iowa, Illinois, Kentucky, Tennessee,  Arkansas, Oklahoma, Kansas, and Nebraska.
Posted by Mary at 3:55 PM