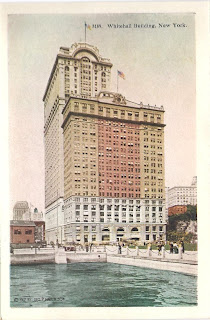 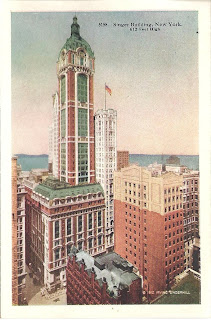 Another couple of postcards from the 1915 "New York City Skyscrapers Souvenir Folder":

The Singer Building (left) sadly, no longer exists.  Opened in 1908, the Singer Building was the tallest building in the world for about a year, until the Metropolitan Life Insurance Company Building (seen in yesterday's post) was opened in 1909.  It was built as the headquarters for the Singer Sewing Machine Company in the Second Empire Baroque Style.  Other examples of this style of architecture in NYC include the St. Regis Hotel, the Plaza Hotel, Temple Beth-El, and Lord & Taylor.  In 1968 it was demolished to make way for the U.S. Steel Building (currently known as One Liberty Plaza), making it the tallest building ever demolished due to replacement (as opposed to attack as was the case in the Avala TV building in Serbia or the World Trade Center Towers in NYC).  Check out the images at the first link, above.  It was spectacular!

The Whitehall Building (right) does still exist, having been turned into apartment buildings in 1999.  It is located at 17 Battery Place next to Battery Park in Lower Manhattan, NYC.  It is referred to as a "skyscraper", but given it's only 20 stories tall it is hard to think of it as such.
Posted by Mary at 10:10 AM