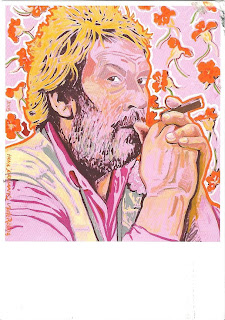 I've said it before, but I'll say it again.  One of my favorite things about Postcrossing is learning about new artists, unusual locations, innovative peformers, and popular local musicians I wouldn't necessarily have heard of any other way.  Here's another example.
The above is a painting by Marte Roling, a Dutch artist and actress, of another Dutch artist, Henk Jurriaans. The two artists, along with three other women, lived together for many years.  Marte Roling was known for smoking cigars, wearing heavy make-up and large paintings and sculptures.  She was awarded the Knight of the Order of the Dutch Lion in January 2010.
Henk Jurriaans was both a psychologist and an artist.  In his therapy practice, he had an unusual approach:  he advised his clients and followers to "do what you love and just stop doing what you find annoying". While this advice may have been perfectly suited to the zeitgeist of the 1970s, it may have been a bit problematic in practice for sufferers of any number of psychological conditions:  ablutophobia (fear of bathing, washing, or cleaning), phagophobia (fear of swallowing), somniphobia (fear of sleep), or my two personal favorite phobias - phobophobia (fear of having a phobia) and.anatidaephobia (fear of being watched by a duck).  Check out the complete list of phobias here.
But I digress.   Another of his messages was "I'm okay. You're a dick", although that phrasaeology is from automatic translation software, so I'm not positive that's exactly what he said. In an interview after his death, Marte Roling said that this phrase was just a commentary on a very popular book at the time, "I'm Okay, You're Okay."

Jurriaans was well-known for offering up himself and the four women he lived with for an hour per day for 25 days in the Stedelijk Museum in Amsterdam as "living art".  He may have been a conceptual artist only, as I was unable to find any other references to his art work.

P.S.  A shout out to Shira from the Netherlands for such a cool postcard.  Thanks, Shira!
Posted by Mary at 6:00 AM