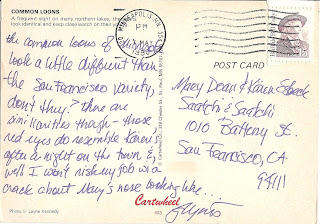 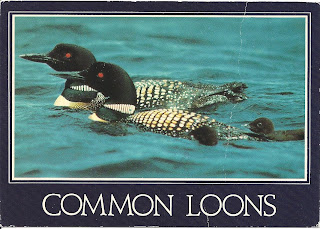 Only one postcard from Minnesota, unless there's more in the stack I just uncovered today.  I found a very large box in my closet that had over 1000 advertising postcards in it (called "free cards, I learned today), as well as several cards that were sent to me over the years, or that were part of my grandmother and mother's collections.

In any case, a blast from my past.  The woman who sent the card worked with me in San Francisco but was from Minneapolis and has long since moved back to be closer to her family.  As I recall, some of her family ended up in California!  The way the world works sometimes.

1.  70% of the state's population is of German and Scandinavian heritage, and is 88% white.
2.  Prince, Garrison Keillor, and Jessica Lange are all from Minnesota.  [What's your favorite Prince song?  Mine is Go Crazy.  I've seen him in concert once.]
3.  Movies and TV shows set in Minnesota include Fargo, Juno,  and the Mary Tyler Moore Show were all set in Minnesota.
4.  The Minnesota State Fair is known for, among other things, the butter sculptures of the dairy princess, also called "Princess Kay of the Milky Way".
Posted by Mary at 11:00 PM