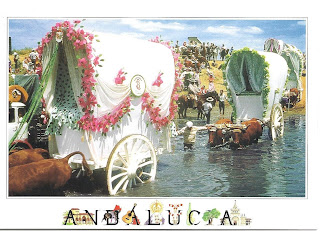 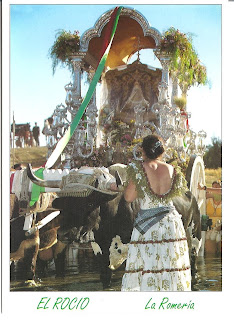 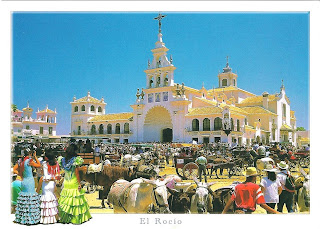 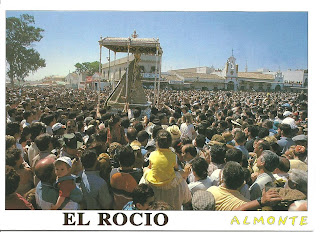 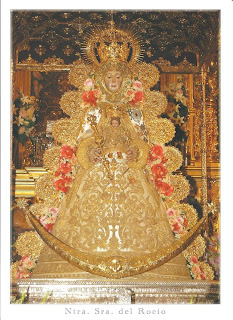 Spain is a country of festivals and pilgrimages, including "La Tomatina" (the massive, annual, late August ripe tomato fight in Bunol near Valencia - Bucket List!) to the "Camino de Santiago de Compostela" (an on-going pilgrimage route running through the northern part of the country, a postcard of which was posted previously in this blog).
One pilgrimage you may not have heard of is "La Romeria de El Rocio", occurring in the province of Huelva, in the southwesternmost part of the country. It occurs every Pentecost , seven Sundays after Easter.
While we were not there during the pilgrimage, we did visit the town. What a surprise, after the cobblestone streets and narrow lanes of the Spanish white hill towns.
For most of the year, El Rocio is an empty village, described as "a strange outpost of the Wild West, with wide, sandy streets lined with houses complete with broad verandahs and wooden rails for tying up horses". There might be less than 1000 people living there, the streets empty and wind blown and better suited for four-wheel drive than a compact rental car. However, during the pilgrimage the population swells to 1,000,000 (that's one MILLION) every year.
It was wild to be there when the town was empty and try to imagine it filled with people.
The pilgrims in groups of "hermandades" or Catholic brotherhoods, travel for up to seven days to reach El Rocio on horseback, in ox-drawn carts, in four-wheel drive vehicles, and dress in the typical dress of historic Andalucia - the men in wide hats and cropped jackets; the women in flamenco dresses, or at least flounced skirts.
It is a huge moveable party, with flamenco singing and dancing, and much wine and frivolity.  When they reach the town, they gather around the chapels of each "hermandade" , and sing and dance and party all night long. While there are streets lines with little houses, there is not even close to enough room for everybody, and mattresses are strewn around the streets, with people sleeping anywhere they can.
The culmination of the celebration is the veneration of the Virgin of El Rocio or La Paloma Blanca ("white dove").  The hermandade which considers itself the protectors of La Paloma Blanca remove her from the church, and parade  her through the streets.  Much commotion ensues as each hermandade grapples to bring the Virgin to their chapel, and other try simply to touch her.  Eventually, she visits all the chapels, is returned to the church and the revelry continues.
By Monday night, the pilgrims are beginning their return voyages home.