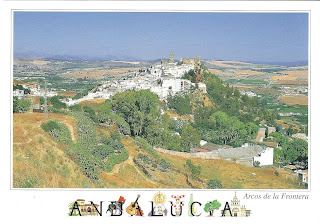 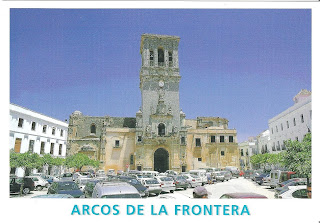 The southern part of Spain is replete with sparkling white hill towns, including Arcos de La Frontera, above.  These towns are remnants of the Moorish rule in Spain, and traces of their influence is seen the local architecture.

We stayed in the parador at the top of the hill on the Plaza del Cabildo, although it looks more like a parking lot than a plaza.  You can see a corner of the parador in the postcard  to the left above.  The tower of the Iglesia de Santa Maria in this same postcard can be seen in the postcard to the right, but from a distance.  You can't tell from the picture, but the church and the parador are perched on the edge of a cliff, looking out over the valley.  It is quite beautiful.

I had not heard of paradores, but the Spanish government saw them as a way to promote tourism and use the funds to help protect the national and artisitic heritage of Spain, and established a this large network of higher end accomodations in castles, palaces, fortresses, convents, monasteries and more throughout the country.  The first one opened in 1928!
Posted by Mary at 1:11 PM