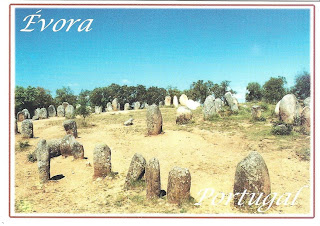 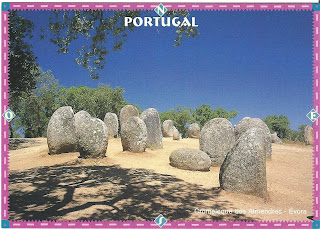 Cromeleque dos Almendra, or Almendres Cromlech, is a megalith complex outside of Evora, Portugal.  During our recent trip, my mom and my sister and I searched and finally found this place, promptly renaming it "Doan-henge".   [For anyone who doesn't know, my last name is "Doan"].

Undiscovered until 1964 (because it was so damn hard to find!), archaeologists don't know who built it or why, but think it may  have served some sort of religious purpose and functioned as a primitive astronomical observatory.  There are a few other sites like this in the area, one of which features a single large megalith (Menhir Almendres) , and another with a long passageway leading to an underground "room".

It's not clear to me the difference between the term "megalith" (from the Wiki:  "a large stone that has been used to construct a structure or monument, either alone or together with other stones" and a "menhir" (also from the Wiki:"a large upright standing stone. Menhirs may be found singly as monoliths, or as part of a group of similar stones. Their size can vary considerably; but their shape is generally uneven and squared, often tapering towards the top."   Whatever these rocks are called, there are groupings or singlets of them all over Europe and the rest of the world, some possibly as old as 6,000 or 7,000 years, but definitely as old as 3,000 years.

And to think I had only heard of  Stonehenge (bucket list)!

P.S.  It's Postcard Friendship Friday.  There are a variety of postcard blogs to check out, if you're interested.
Posted by Mary at 10:03 AM