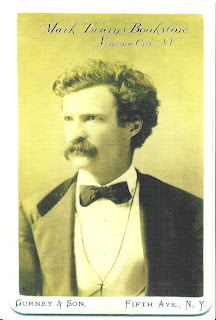 There's not much most of us don't already know about Mark Twain, "the father of American literature".  I've read many of his books, and some of his short stories.

I did manage to dredge up one thing I didn't know:  he pretty much predicted the timing of his own death, and/or defied the adage "If only wishes made it so".  According to the Wiki, "...in 1909, Twain is quoted as saying:  'I came in with Halley's Comet in 1835. It is coming again next year, and I expect to go out with it. It will be the greatest disappointment of my life if I don't go out with Halley's Comet. The Almighty has said, no doubt: 'Now here are these two unaccountable freaks; they came in together, they must go out together.'  His prediction was accurate – Twain died of a heart attack in 1910, one day after the comet's closest approach to Earth."

"The lack of money is the root of all evil."

"Twenty years from now, you will be more disappointed by the things that you didn't do than by the ones you did do. So throw off the bowlines. Sail away from the safe harbor. Catch the trade winds in your sails. Explore. Dream. Discover."

I particularly like that last one.
Posted by Mary at 1:09 AM