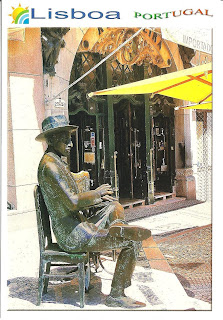 Have you ever heard of Fernando Pessoa? I hadn’t. He died before he was 50, in 1935, and at least one critic considers him one of the most representative poets of the 20th century. This postcard shows a sculpture of Pessoa, seated in front of a famous coffee house in Lisbon, "A Brasileira". When we were in Lisbon , our tour guide walked us by this place, describing Pessoa as one of the most famous and revered of Portuguese writers, known for writing in a variety of different styles.
In fact, Pessoa is known for inventing the concept of “heteronyms”, which he used throughout his life.  More than 70 heteronyms are attibuted to him, some of whom “knew” each other and criticized and translated each other’s works. (Sounds like Sybil to me.)

The literary concept of heteronym, invented by Portuguese poet Fernando Pessoa, refers to one or more imaginary character(s) created by a writer to write in different styles. Heteronyms differ from nom de plumes (or pseudonyms, from the Greek "False Name") in that the latter are just false names, while the former are characters having their own supposed physiques, biographies and writing styles.

These heteronyms sometimes intervened in Pessoa's social life: during Pessoa's only known romance, a jealous Campos (one of his heteronyms) wrote letters to the girl, who, enjoying the game, wrote back.

Now I know what the tour guide meant.
Posted by Mary at 7:53 AM