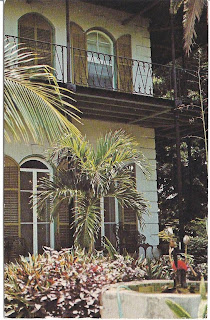 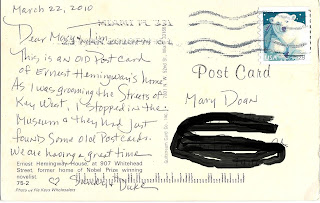 Second in a short series of writer postcards, short because I only have three.  This postcard of Ernest Hemingway's Florida (Key West) home, was sent to me by Sandy and Duke, at the beginning of their trip throughout the US and Canada.  Sandy is one of my loyal postcard senders, and I'm looking forward to following their adventures through the postcards they send.

Postcard collecting is often serendipitous, as was the case with this one.  As Sandy mentions above, "...I stopped into the museum and they had just found some old postcards."  I love that!  Not clear exactly when this postcard was made, but I'm guessing 60s.  Ernest Hemingway committed suicide in 1961.  By that time, he was living in Idaho, having left Cuba (and Key West?) in 1959.

I thought a lot about Hemingway and his novel, For Whom the Bell Tolls, when I was in Spain.  I got the feeling that the Spanish Civil War and the subsequent 40 year (FORTY YEAR!) Franco dictatorship are two things the Spaniards don't really want to talk about much.  Not that I spent a lot of time talking about this with Spaniards, or even asked the questions.  It's just a feeling one gets.
Posted by Mary at 6:23 PM