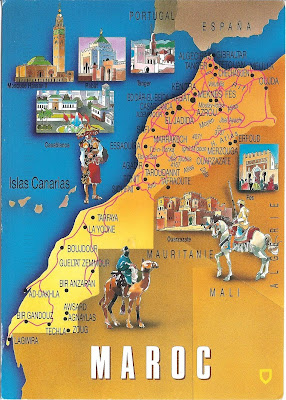 Morocco is a lot bigger than one might think.
Notice on the map the distance between Marrakesh and Fes, in the northern half of the country.  That's about ten hours by bus, through Casablanca.  A loooooooong ten  hours on a bus with no bathroom, no explanation of the program (We're stopping?  Is this for a bathroom break, a meal?  What's that - you've got your prayer rug out and are praying toward Mecca?), and an old man hocking loogies into a handkerchief in the seat across the aisle.

We were on the plane from Spain to Fes, happy to be up in the air due to all the cancelled flights resulting from the Icelandic volcano.  As we were about to land in Fes, the pilot announced that due to a thundershower parked over Fes, the plane would be rerouted to Marrakesh and we would be bussed back to Fes.